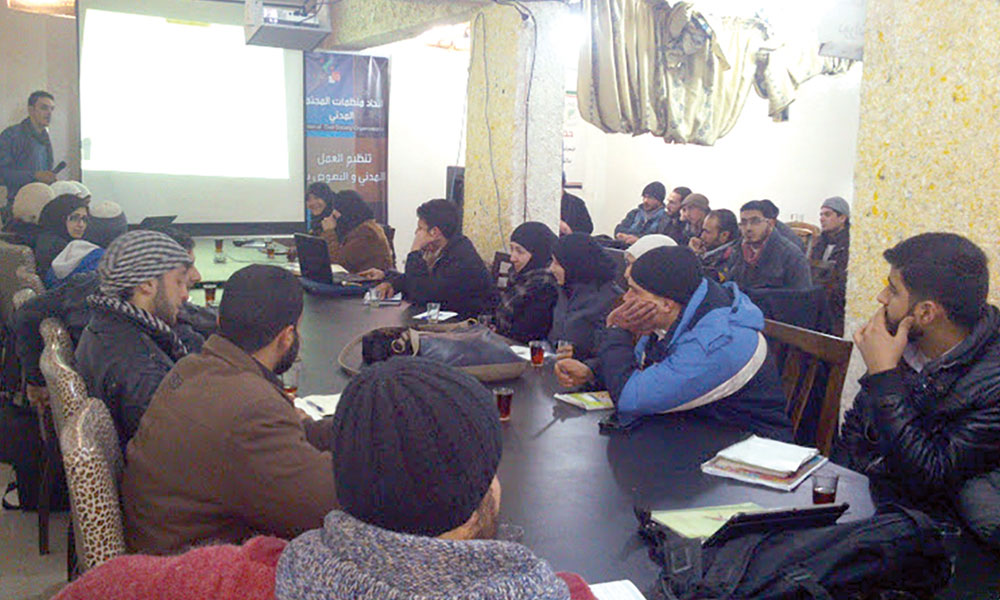 Rising for Freedom Magazine has organized a training course on the Basics of Journalistic Writing that included more than 30 trainees. The course was organized in cooperation between the magazine’s office in Eastern Ghouta, Bayt Al-Shami Organization and the Union of Syrian Civil Society Organizations.

“The warplane is still hovering in the skies as the striking continues. I have waited for a long period of time and so I will not allow anything to prevent me from attending the lecture although it is now about eleven in the morning.”

Twenty five trainees and trainers gathered for a training course on journalistic writing in a basement, equipped with an internet access and a projector, in one of the besieged towns in Eastern Ghouta.

Usama, Deputy Chief Editor of Rise for Freedom Magazine, is trying to contact the trainer online with the assistance of Basil the IT technician.

The 22-year old Shadi started his work in media during the revolution. He prepared televised reports and took part in televised proceedings.

Shadi was interested in attending the course in order to develop his capabilities in journalistic writing. Along the past years, he tried to overcome the difficulties, facing him in journalistic writing by seeking online training or contacting professional journalists outside Ghouta. Finally, his dream has become reality in this place when “Basics of Journalistic Training” appeared on the screen and the voice of the trainer Zena Irhayem was heard from loudspeakers.

Mr. Mohammed Thaer, one of the participants, shared with us views regarding the reasons behind the nearly absence of media training in Eastern Gouta. Mr. Thaer is an activist in documentation and worked previously for the Media Office in Douma Coordination Council. “The residents of the area do not support work in media, and so not many people are specialized in media work. Moreover; the siege, which has been imposed on Ghouta, prevented specialists from reaching the area. There are also technical reasons that added to the problem, preventing us from organizing remote training in the field of media.”

Thaer pointed out that the mess and absurdity, pervading the media work, due to the lack of experience and professionality, led to counterproductive results in the documentation of martyrs and injuries, in addition to many other mistakes.

He added, “We had held several training courses on written and televised reporting to cover the urgent need for this type of journalism. Unfortunately, the project failed due to the insufficient capabilities and the lack of interest in the field of media by the existing organizations, which are more interested now in relief issues.”

For these reasons altogether, the course, launched by Rise for Freedom Magazine on the “Basics of Journalistic Writing”, enjoys a special importance. The course was held during the period between December 24, 2015 and January 14, 2016, upon three meetings a week. The course was supervised online by a group of well-experienced journalists and facilitated by Bayt Al-Shami Organization and the Syrian Union of Civil Society Organizations.

Communication with the trainees was not an easy job as the contact between the trainers and trainees was online. Journalist and trainer Zena Irhayem said, “This is my first experience in online training. I prefer to communicate with the trainees face to face and this situation made me feel stressed. It is better to see the trainees in front of you and react with them. This negatively affected my training capabilities. As well; there were certain technical inevitable problems under the current conditions. Iryaheym is Coordinator of the Syrian Project with the Institute for War and Peace Reporting.

Usama Nassar is Deputy Chief Editor isn Rise for Freedom, which is an independent Syrian magazine that was founded in 2012. He is the field coordinator of the course that targeted 35 young men and women. Due to the tough conditions in Eastern Ghouta, the siege and military escalation, only 25 trainees were committed to the course sessions.

Nassar said, “The magazine was encouraged by the efforts, being exerted by the activists and decided to help them develop their capabilities through this training course with the goal to increase their abilities to produce written media reports, based on the minimum standards of professional journalism work.”

He added, “Modern media aims to reach people and report their views, sufferings and aspirations. We felt the need to rehabilitate and empower activists, who seek to develop their capabilities in journalistic writing to be able to produce professional journalistic material. For these reasons, we were encouraged to organize this course.”

Nassar referred the delay in launching the course to logistic reasons. He said, “We have been bearing the idea of the course in mind for a long time, however; for logistic impediments, we postponed its implementation. Moreover; when we first opened the offices of the magazine in Ghouta, we did not have any idea about the people, who were interested in such training.”

Bayan, one of the trainees, commented: “The course was very fruitful. Since the beginning of the revolution, I have been writing essays about the events in my city. My writings were immature and their style is not professional as the journalistic reports I read in the press. Here comes the importance of the course for me and I hope other training to follow.”

Regarding the situation of media in Eastern Ghouta, Ms. Rima, a teacher in the area, said, “Media in the area witnesses a great weakness and is incapable of covering the disastrous events, taking place on ground. Such a situation, I think, is negatively reflected on the way we can present the actual situation to the international community.”

Haj Abu Kasem, a worker in a popular market in Ghouta, added, “Many massacres take place every day, but they are not mentioned in the news reports and there is no single reporter from here to appear and tell the right story.”

It is worth to mention here that several incorrect reports were published by foreign media outlets. The reason was that they were written by journalists, who have never arrived in Ghouta and do not have an actual idea about the events on ground. They depended, in their reports, on what is being posted and communicated on social media. This has weakened the credibility of the immature revolutionary media.

During the training course, the specialized trainers Majd and Hassan supervised training on information security. Both trainers work for the Salamtak Project, a non-profit project to help Syrian activists and civil society organizations to safely use information technology. The journalist Orwa Mikdad also shared with the attendees his experience in journalistic writing and building the news story. The workshop was concluded with a session on customized applications for Rise for Freedom Magazine. The session was supervised by Editor-in-Chief Layla Safadi. 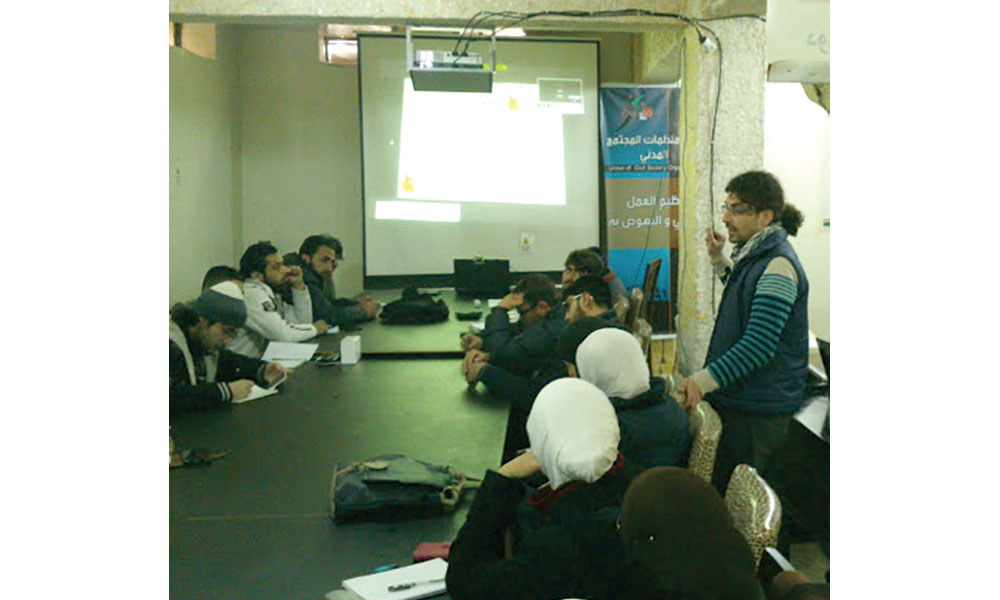