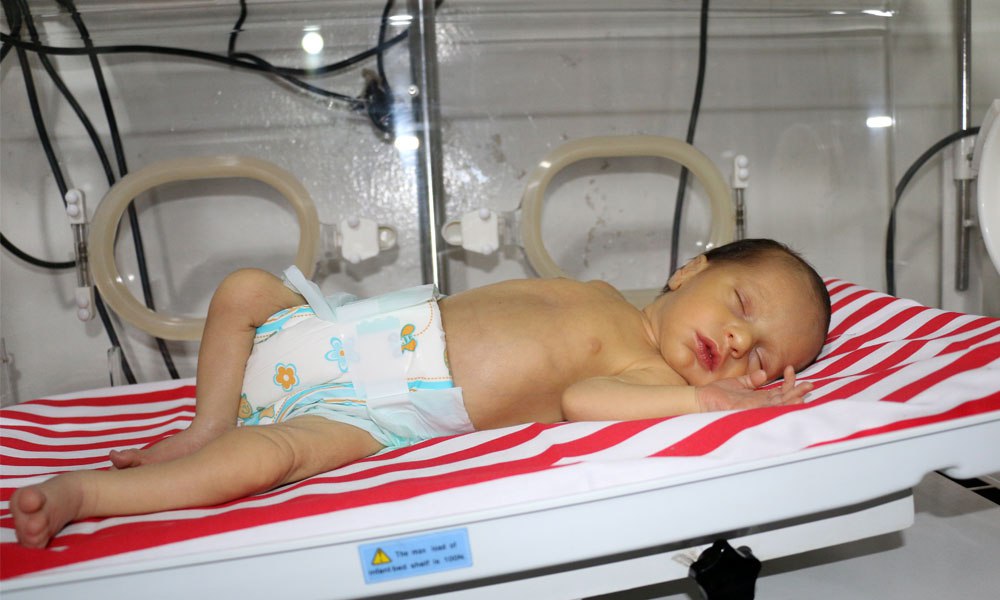 A moment of silence overwhelms the place. The injuries stopped moaning. The nurses were immersed in their work. Everyone was gazing with astonishment towards the left corner of the hospital. They were witnessing the moment of a life getting out of the womb of death!

Dozens of injuries arrived at the medical point in Douma. The site was designed to serve 20 people maximum. Today the number of the wounded exceeded 50. Two physicians and five nurses, the entire staff, are not capable of serving all those injuries, who do not find a bed to lie on. Some of them lay on ground, whilst others on the stairs. Other injuries were luckier as they found a tiny space at the bedside of other injuries. A state of chaos and blood filled the hospital, whilst more injuries were being rushed to the medical point.

A moment of silence overwhelms the place. The injuries stopped moaning. The nurses were immersed in their work. Everyone was gazing with astonishment towards the left corner of the hospital. They were witnessing the moment of a life getting out of the womb of death!

Infant Iyad Elshawwak was rescued and got out of the womb of his dead mother!

Physician Mohammed Attar, who performed the operation, said, “Um Ziyad arrived dead after sustaining shrapnel that penetrated into her back to settle in the heart. We discovered that she was pregnant. One of the nurses was doing an abdomen examination for the body when he felt a kind of violent knocking from inside, as if it was saying, “Get me out of here … help me … I am still alive.”!

Attar continued, “I was perplexed for a moment. Shall I sterilize the mother’s body before the operation or not? Shall I wear gloves or not? There was no time left. I bypassed all those routines and other medical standards. I took the medical scalpel and opened her abdomen to get Iyad out in the last minute. His lips were blue as he was about to suffocate.”

Some people cried of joy for rescuing the fetus. Some others were sad for him as he was born an orphan. Iyad was the first of five fetuses to be rescued and medicated by Dr. Attar after their pregnant mothers were wounded.

The last delivery case of a dead woman took place on December 10, 2015. The mother, in her sixth month of pregnancy, was killed during the shelling on Douma that day. Physician Mohammed performed an operation to get the fetus out of her womb alive. But several hours later, the infant followed his mother to the other world.

Yousef Elshawwak, father of Iyad said, “On Sunday, December 6, 2015, my wife and my 6-year old son Ziyad went to the city market to bring some stuff and clothes for our coming baby. He was expected to come to life naturally in seven days. The forces of the regime targeted the market with artillery shelling. My wife was one of the victims.”

The son Ziyad continues, “We were walking in front of the commercial stores, when a bomb fell behind us. I was wounded in my hand and my mother in her back. She did not fall on ground immediately. She ran several meters before she fell down.”

“Ziyad, my son, don’t panic and don’t be sad. I am going to die. Take care of yourself,” these were her last words as Ziyad recalled.

That day was violent in Douma. The regime forces targeted the popular market, which is always crowded with people. That was not the first time this market is targeted, but it was the only place many people seek for selling, buying and working to get their living and support their families in spite of all the dangers surrounding them.

Abu Ziyad was stunned at first when the ambulance brought his injured son. He still cannot believe that his wife has passed away although he buried her body with his own hands. He could not be happy for the rescuing of his son Iyad, whom he was wishing to see after seven days with his mother. However; the rescuing of Iyad “mitigated the disaster,” he said.

He added, “I don’t know how we will continue our lives without her. Will I be able to take care of two children? I can be father for them, but it is not easy to play the role of their mother with its kindness, especially as we now have a sucking infant, who is in need of special care.”

Iyad is now one month and ten days of age. He looks in good health. His aunt is taking care of him temporarily despite her tough conditions. She is mother of two little children and hardly can afford to meet their needs. But she will try her best to compensate Iyad for his martyred mother and fill the empty space her absence has left. She only hopes that the absence of his mother won’t have a negative effect on him when he grows up and know that she granted him life out of her death.

Revolutionary Media …. Between Immaturity and Professionality
The ‘Last Gasp’ Strategy
To Top