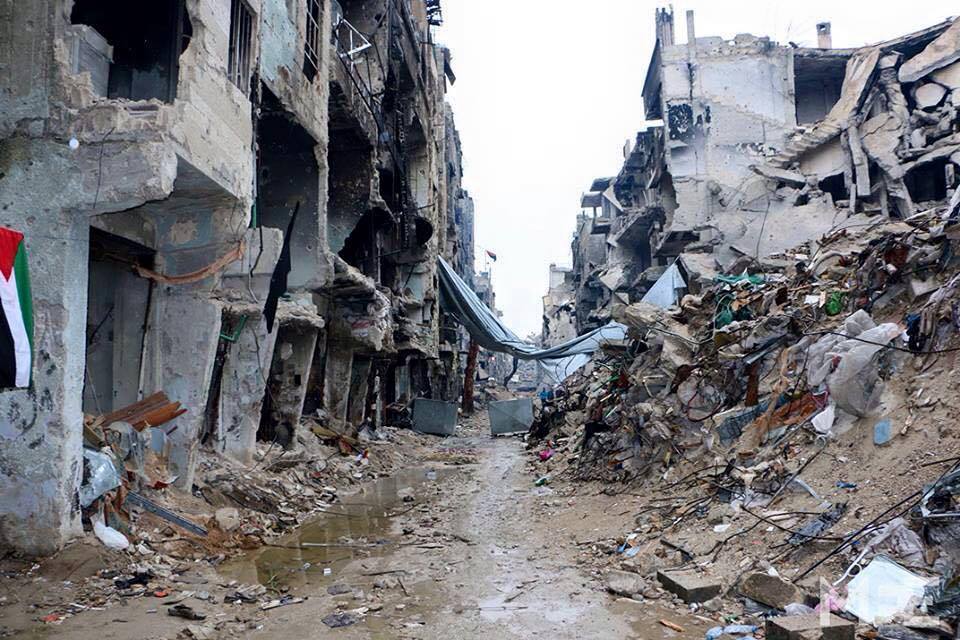 They left.. As they did sixty years ago, nothing changed, what they left behind is exactly what they left behind the first time. What they carried with them, was exactly what they carried with them the first time. Nothing changed..They only left behind what they could not carry. They left homes burdened with memories, streets worn out from their daily steps, clothes that carry their smells and preserve them safely under the ashes. They left the same names: Haifa, Jerusalem, Karmel, Qastal, Teri, Lubya, and Safad. They left the old martyrs’ graveyard and the new one too. It seems like no one paid attention that a person left his automatic washing machine with his life savings hidden inside to keep for his son’s wedding. No one remembered that one of them left his musical instrument beneath the table, that a teenager departed without his lovers’ pictures, nor his book of silly poetry… no one remembered that the new plasma screen was left behind, brand new in its box, denying the owners the chance to try it, or sit around it and enjoy as they did gathering around a fireplace enjoying warmth in cold weather… they all forgot to mention, that those kids left without their toys, that breastfeeding mothers left with milk drying out from them.. They left, exactly as they did the first time.. Faceless

Nothing changed, the same names remained; the same destroyed dreams remained; the killer is the same yet with a different name; the corpses also remained the same after all this time; they left them behind and departed without taking them along in their second immigration!

One asks another: is it the second refuge?

*No, we learnt from yesterday not to hang on to the tent; but the camp was not a tent. I will stay; I will move to a close neighborhood for few days and will return. I will not be a refugee a second time.

*Stay then, I have lost hope in these homelands, I am going away for the sake of my children, you hold on as you wish… to death!

*He who has experienced being a refugee knows very well that he does not want to become a refugee again, in a land strange to him, a language that he does not know with a totally strange people. There is not enough time left to experience that again. You go… I will remain holding tightly to death in order to live… I know this death… and the death you know is better than the one you do not!

They departed, exactly as they did when they left Palestine. They left behind what they did, and carried memories of destroyed homes, scars amounts to the number of the camp’s population, clothes sufficient for a couple of days at most, a few identification papers and the keys to their homes. Yet the keys this time were smaller. The graveyard is overpopulated with the dead, and the marble is less. No one knew that the savings by a parent for his son’s wedding were hidden in the washing machine in fear of it being confiscated by soldiers at the checkpoint. The savings were lost with the machine, and the musical instrument tampered with by soldiers who fought over it and destroyed it in the end, as if other behavior is ever expected from soldiers! They left, not knowing what happened after their departure; maybe…they should not really know at all, in order not to affect the inner voice and aspiration for return!

One year later after their departure from the camp, they received the news of the martyrdom of Hassan as a result of torture. This Hassan, or more precisely “that” Hassan, did not want to leave the camp, he only wanted to produce a yearly theatre show, and show it inside the camp. Only inside the camp. He did not want to become famous; he only wanted to be normal, natural, as any of the other faces in the camp. The killer realized the danger of Hassan and his values; he killed him!

To you, the slum that we love, the slum destroyed over the heads of its lovers, what more do you want than our endless efforts to beautify your ugliness? What more do you want than our pride of belonging to you!? We, the children of the slum and ruins, we, the destructive and the destroyed, the hungry… the potential killers and the potential victims and dead and, the potential living. Nothing gives us a name or defines us but the tin roofs and the stereotype of a being a “camp-being”. You displaced uprooted persecuted exiled martyred refugee! Why did you give the same name to two graveyards?!!

They killed Hassan the comedian because they are frightened by the smile. They killed him in the darkness, and left the hand of darkness free to finish us all. Here are the criminals of the night killing in broad daylight, in the name of God, and in the anniversary of Hassan’s death and the uprooting the camp’s population. Hassan used to say:”I like to introduce myself as Palestinian-Syrian”. Thus he is the son of a dual death. His Syrianism killed him, when his Palestinianism did that too. Whoever misses being killed by both would be killed by one, and the second would keep him living yet, with a dead soul wandering around with no tomb. The last we heard from Hassan, was: “when I remember how Damascus looked like… I feel I will never see it again”. Hassan was right.

They left as they did the first time, nothing changed. They were thrown out, as Hassan’s body did his soul. This is what the Syrian MIG air forces did to them, this is what the Palestinian-Syrian security branch did to Hassan and this is what the extremists are doing to the rest who remained under the siege.

* A Palestinian Syrian poet and writer.

A Syrian-Palestinian poet and journalist. The editor-in-chief of “Abwab Newspaper” (www.abwab.de) “the first Arabic newspaper in Germany”. Cultural editor of “Freedomraise Magazine” (www.freedomraise.net) “an Independent magazine interested in affairs of Syria, the Syrian Revolution, Syrians, refugees and their issues, published in print and electronically, distributed inside Syria and in Syrian refugee camps”. He issued his first book “Walking on Dreams” in 2014 which is a poetry book about the Syrian revolution, then earned a grant for full-time writing of “Heinrich Böll” Foundation in Germany. Writes in many Arabic and German newspapers and publications. He lives in Germany since November 2014 in Cologne.