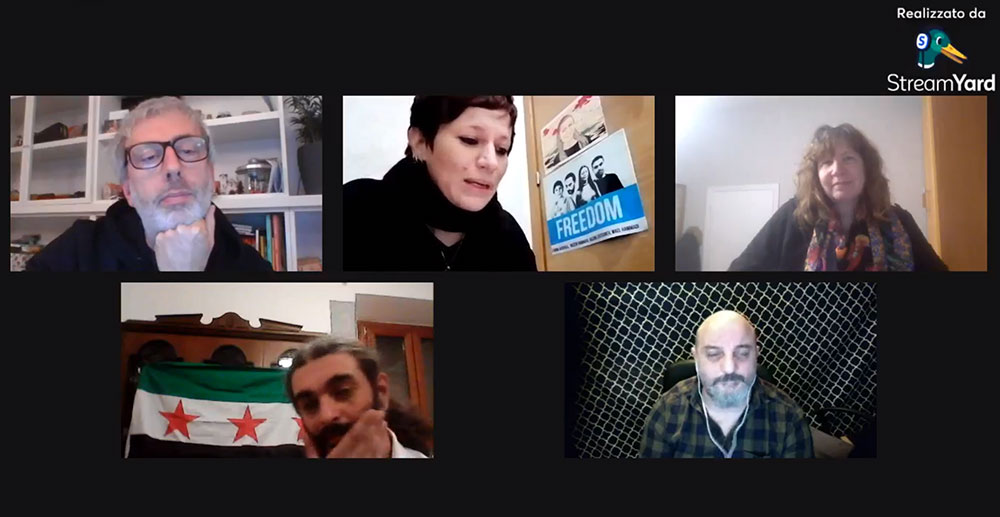 Since I was 16 years old, I used to go to the demonstrations in my town in Southern Italy. Demonstrating for keeping advantages in public schools or for the defense of some of the

In any case during the protests there was always, in the middle of the demo, somebody waving a Palestinian flag. During the 90s, violation of human rights in Palestine, by Israel, was something evident even Palestine seems to be so far away.

Years passed and something called “globalization” appeared in our lives, (but still everybody knew about occupation of Palestinian lands, but nobody knew that since 1970 in Syria greatest atrocities were taking place) and Arab countries didn’t seem so far anymore.

Typical Italian traveller had already traveled to Egypt or Tunisia for its beaches. And Libya was a friendly country, but only for Berlusconi and Gheddafi’s supporters.

One by one, Arabian dictators were falling. But, what about Syria? We asked. A country 3 hours flight away from us. But it has always been a problem to talk about the so-called “kingdom of silence”, ruled by the Assad family. Especially with Assad supporters’ media, that repeat its lies spread false information about the Syrian opposition, like rebels were considered all terrorists, Assad a socialist and enemy of USA and Israel.. Such a bad, at least 30 years old propaganda.

But he/she who was following the Revolution through the stories of people of the opposition on the ground, via Facebook or YouTube, knew about the pacific demonstrations repressed by the brutality of the regime and its team, knew about arrests, kidnappings, bombings…

Then, the regime decided to use a new weapon against the people: SIEGE. No food, no medicine, no fuel.. people had to think about how to survive, not “making a Revolution”.

Watching the images of starving people, I thought about people in concentration camp, during Nazi’s era.

How was it possible? This tragedy was taking place in front of the whole world, that condemned the fact, but they did absolutely nothing on the ground  to help people. Homs, Daraya, Ghoutas, Yarmouk, Aleppo.. How was it possible such a disturbing and hypocritical silence? How was possible to the Assad family to stay in power while they where starving, killing and torturing many of the population?

I followed the events of Eastern Ghouta siege, reading the news written by an activist lawyer who was in Douma (Eastern Ghouta), her name was Razan Zaitouneh, denouncing crimes of each part involved in the conflict.

As the Syrian regime was searching for them, she and Samira AlKhalil escaped to East Ghouta. Samira is also another person who is never tired of helping people in the middle of tragic events. Then arrived Wael an Nazem to help with the enormous amount of work to do with other activists.

But Razan and Samira, their word was free, they had no fear to shout, even to the Salafist armed group that ruled in Douma.

As a European woman, it was my first time to see such women of courage.

When the four activists were kidnapped we were shocked, we saw people in power in other countries denouncing the fact as a crime but again, nobody really helped the families to have their beloved ones  back. It was happening again and again, only empty words from the West.

So, I decided that people had to know them and their work.. I translated a lot of articles written by Razan during the time of the Revolution and collected them in a blog. On December 9th 2021, I involved other Syrian and western activists to talk about them, Aritno who is a Syrian activist and photographer that also was in Douma at that time, was among the speakers. I discovered a lot about Samira and Razan during his talk, and the conversation was very emotional, especially when he talked about daily life in Douma with the four.. I discovered that they were even more human and brave than I had thought.

In 2018, I started reading Samira’s Diaries in Spanish. That spring, her husband, Yassin al Haj Saleh, came to Barcelona to present the Spanish version of his book “Impossible Revolution”. He is a great man. I had translated some of his articles earlier, and I didn’t want to lose the opportunity to listen to him and to meet him. It was really an important moment for me.

Few days later, I wrote to him: Hi Yassin, I want to translate Samira’s Diaries into Italian. People have to know what happened in Douma and in Syria. They have to discover these fantastic human beings who were there to help.

So, I spent one year and a half years being Samira’s Italian voice.. Such an honor for me, and a great experience as well.

Ten years passed from March 2011, almost 11. The Revolution is not over! The International Community is still unable to act in order to save Syrian people and kick Assad off.. Refugees spent nights in the heart of Europe, freezing and starving, just like what happened at the time of Balkan war, many years ago. History is a great teacher, but has no students to learn! Western society as if was still living its Middle Ages. People in Europe still think that Assad is not the worst for Syria, and that opposition is only made of bloody terrorist groups.

It’s still hard to convince people about the torture and crimes of Syrian regime against innocent people.

Ask for justice and freedom for people that have been fighting for 11 years.

If a man is not free, no man is free.

So, I join my voice to free Syrian People: We demand Freedom and Justice for Razan, Samira, Wael and Nazem and all the 140.000 forcibly disappeared or detained in Syria.