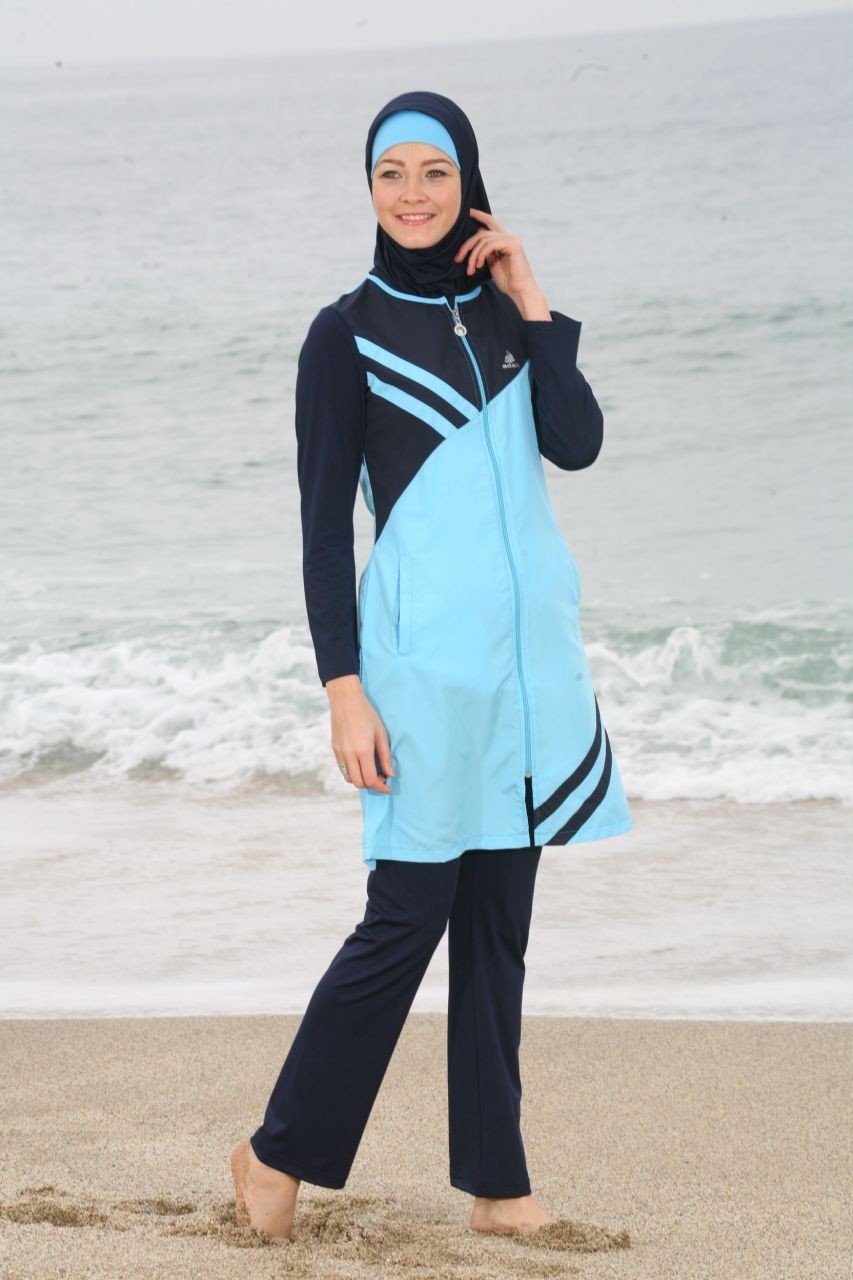 I would like to start by saying that I, personally, don’t like burkinis, nor do I consider any part of a woman’s body to be immodest and needs to be covered. I am also all for the freedom of women to choose their dress. Having said that, there are some rules and customs that should be upheld. If some country bans swimming in unconventional attire, it would not be unreasonable to see authorities enforcing such a ban.

I have no qualms with a woman wearing a burkini, but I do take issue with her husband, swimming alongside her in swim trunks, enjoying the chill of the water and the warmth of the sun against his skin. I take issue with the mentality that dictates that a woman’s body does not belong to her, but to her husband or any male blood-relative. Such mentality portrays men as wolves ready to pounce on the first unveiled woman they encounter. Lastly, I take issue with the concept of immodesty as it is absurd to think that the Creator would be ashamed of his creation, and therefore commands us to conceal it.

Media outlets have published photos featuring four French policemen seemingly forcing a Muslim woman to take off her burkini while on a beach in Nice in southern France. The news spread quickly through social media dividing the public into pro and against.

This came after an ordinance had been issued by the municipality of Nice, along with fourteen other cities, to ban women from swimming in unconventional swim attire, including burkinis. Deputy municipal chief of Nice said it was necessary to ban burkinis after the “jihadist” attacks last month, where a terrorist jihadi killed 84 people and wounded 100 others when he drove his truck into a crowd celebrating France’s national day in Nice, southern France. The Islamic Council of France, however, expressed concern over the direction the debate in France is taking, and the highest administrative court will be debating a lawsuit to overturn the burkini ban.

Writers, intellectuals, and rights activists stood against the French campaign against burkini-wearing-women. Lebanese writer Diana Mukalled wrote on her Facebook page: “When I saw that photo of the woman on the beach being forced to take off her clothes, I couldn’t help but recall the image of the Saudi religious police who force women to cover their bodies. I don’t know what difference between the two there is. Women’s bodies are feared just as much as their clothes are. It’s the fear (that is the problem), not the clothes.” Human Rights Watch media director, Andrew Stroehlein, gibed in a tweet: “How many armed officers are needed to force a woman to undress in public?”, while an Italian Imam posted a photo of a few nuns on a beach on his Facebook account with no comment.

The debate on hijab, niqab, burkinis, and Muslims in Europe is likely to continue for a long while in Europe and the Arab world, especially after the exodus of refugees from Syria, Iraq, Afghanistan, Somalia, and northern Africa, and the terrorist attacks that targeted major cities in France, Belgium, and other countries. Those defending a woman’s right to choose how she dresses will continue to explain their views in Europe. And while I don’t disagree with them on that point, I do disagree with them when they confine this right to Europe and ignore it in our countries. Most intellectuals who were quick to defend burkinis and face veils before that, have not demonstrated the same enthusiasm in defending women’s rights to showing their skin, driving cars, employment, equal pay, coed education, wearing regular swimsuits, or political rights in the government and judiciary in countries like Saudi Arabia, Qatar, Egypt, Iraq, Jordan, etc.

The fact of the matter is that we often contradict ourselves when we discuss women’s issues and basic rights, claiming that “things could not be any better” for women in our countries, citing reality, customs, and traditions.

Women in Syria were at the forefront of the protest movement that took to the streets demanding freedom, dignity, equality, and the fall of an oppressive and tyrannical regime; women such as Razan Zaitouneh, Dana Al-Jawabra, Hervin Ousi, Nahed Badawiyeh, Sireen Khouri, Ruba Al-Labwani, Nisreen Hassan, Wafaa’ Al-Laham, Layla Al-Labwani, Duha Hussein, and Rima Flaihan, to name a few. However, their participation quickly dwindled as money started flowing from foreign players to male fighters to grow their beards and abandon the original demands of the revolution for Islamist ones. Unfortunately, intellectuals and rights activists did not sound their objections to marginalizing women, pushing them aside, and eventually quarantining them in their homes.

Lastly, I could not end this article without mentioning “Burkini”, a beautiful novel by Maya Al-Hajj, where she asks thorny questions, ones that are typically avoided, through a character who happens to be an artist. She loves to draw female nudity and the human body, while she, herself, chose to cover hers. She thought her faith would bring her answers to those questions. When faith failed, she turned to art. Though she wears a headscarf, she bravely acknowledges: “For all the times I’ve seen my friends wear this burkini in countries where no women-only swimming pools exist, I could never picture myself wearing one. It’s either that I wear a bikini in a women’s only pool, or forgo swimming altogether. What I like about swimming is the immersion of my body in water, to feel it against my skin. I live between two worlds: my modest clothing and my liberal beliefs, between a headscarf that covers me and nude bodies that I admire, between a burqa and a bikini.”