I still see her in that near-yet-far-away town. With her eighty years of life, she roams the spacious house, checking on her children and grandchildren, all the while apprehensive of the evils of a gang that she has come to know all too well over the course of half a century. She experienced its misery and rancor which manifested in the ugliest ways during the years of the forsaken revolution.

There my mother was, like all mothers. There she spent her years guarding the absence of her children in a time of humiliation when a day’s sustenance was not easy to secure. Today, in a time when that rancorous gang raids homes, my mother stands guard over a tribe of children and grandchildren. She keeps safe a neighborhood that has become a piece of her heart. She stays up at night by the entrances, following the sounds and footsteps of the children from a distance, going against her habit of not meddling in their affairs. But things are different today: Houses are vulnerable to raids, and young men are vulnerable to death, detention, torture, and disappearance.

I remember the day when you conjured up eighty years of strength to stand up against a rifle filled with their treachery. You grabbed it and aimed it at your chest to protect your grandchildren. I remember their debilitating shock, surely not due to their humanity, but pursuant to the orders of not firing in that town so early in the revolution.

I remember you, mother, when you were in a bus at Al-Kabbas checkpoint, when the regime soldier snatched the sandwich from your child who went hungry with the recently imposed siege on Eastern Ghouta. I saw your heart shatter on the asphalt where the sandwich was thrown and trampled by military boots. Screams of pain and humiliation stifled your soul, and you held your child to your chest with the realization that motherhood is a privilege that comes with pain. The virgin Mary heard your screams, and they dwarfed her sorrows.

I remember you, mother, at the doorsteps of security branches. Unshaken by the profanity and the rejection, you braved the armed rats lining the street to find out about your son. Isis, the Goddess, did not tell you about the horrors and the darkness of the other world, nor about the dangers on the way to it. You still braved the trip alone, accompanied only by your feelings of motherhood and hope. With your cane propping up your years, you marched with the peaceful protesters to protect your children, all of whom just broke free from the bottle of humiliation. It was not a wizard’s cane, nor was it the staff of Moses which parted the sea to save his people. It was the cane of old men, supporting you during your last years, blessed by overwhelming motherhood that surpass the holiness of all prophets and messengers.

I saw you there, guarding the homes that your children left in a time when a barrage of bombs rained on towns and villages. Your embrace as vast as the land, the wheat fields, and the sand, and your loving hand gathers whatever remains of a life in waiting for the return of those who left.

I remember you swinging your slipper at the security guards who raided your home in the middle of the night to take your son. But motherhood never sleeps, and though you lacked a weapon that would hold up against their barbarity, you would not give up protecting your children. You were hung from the ceiling of the tyrants’ dungeons because you confessed to smuggling baby formula into besieged Darayya, taking the fall for your son’s “crime”. Enduring pain turned out to be the most prominent part of your motherhood. You embraced the agony to save your children.

Who could forget your image during a siege that covered cities and towns as vast as this world’s hypocrisy and immorality. You planted the ruins of homes so your children can eat. The Greek goddess of agriculture, fertility, and harvest, Demeter’s wrath drove the land into aridness, while your wrath fertilized it to bring food to your hungry children. Who could forget your footsteps on the path of asylum, shaking the conscience of the conscienceless while you carry your tattered belongings and a handful of youngsters, showering them with your affection while you await God’s long awaited mercy.

You were not the Roman “Diana”, nor the Greek “Artemes”, the Goddess of hunt and protector of children. You did not carry bows and arrows. You were the great Syrian mother with all her suffering, agony, life, and death.

In conclusion, I recall what the Greek writer, Dimitri Avghérinos, once wrote: “It is all sacred, rock by rock. This land is a cottage for Gods who lived with us. Star by star, they lit our nights of prayer. We walked barefoot to touch the essence of rocks. We walked naked so the soul of the air would bestow upon us women who would bring back the bounties of nature.” 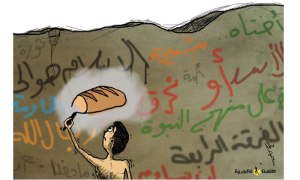