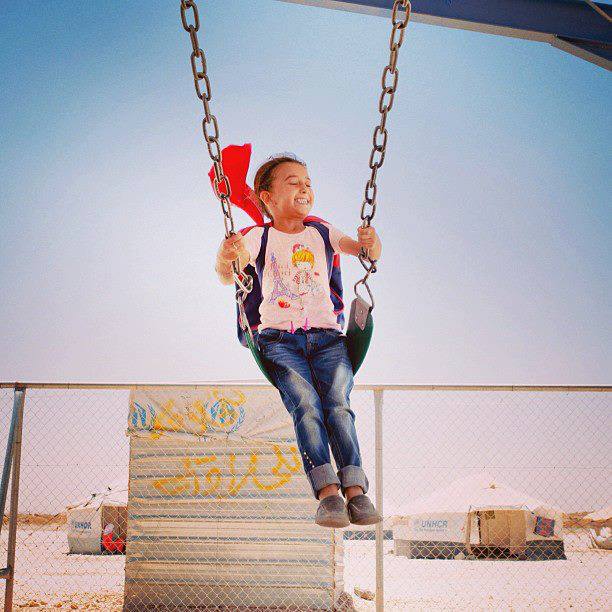 As of the early days of issuing the magazine, we used to publish a special report on issues, concerning the revolution. Meanwhile, the editorial board suggested injecting the special report of the current issue, with optimism.

The proposition was suspended for several days. It was silenced by news on the martyrdom of a relative here, or a new massacre there or further in a neighbouring countriy. We found that everything is hovering over us, except optimism, the possibility of which is not absent though.

The proposition was waiting for someone to bring it back to life by suggesting a subject that includes optimism!

We looked for optimism during the period of the feast holiday to find that the Syrians have used the holiday as an opportunity to heel their wounds.

Perhaps no single Syrian has celebrated the feast holiday with all his family members around.

In the early hours of the feast day, the Meg fighters did not disappoint the expectations of the people in Damascus and the surrounding areas. They confirmed that the sound of the warplanes and their movement were unusual. Some friend said sarcastically, “The father of the pilot bought him a new plane and the son of ……… was happy with it”!!

In order to avoid any unexpected disaster, such as an explosive barrel or a rocket attack, safe compounds were established in several areas in Syria for the civilians to celebrate the feast.

Swings, toy stands and sellers of sweets of poor quality hid in reinforced buildings or shelters! These courtyards were planned in different hamlets.

It represented a battle, with the goal to liberate happiness, distributing it as booty to children!

In certain areas, the swings and stands of “Ghazl el-Banat” sugary sweet may have chosen to be unhidden, directly below the bare skies.

You are overwhelmed with a strange feeling when you pass by these compounds. For a while they look miserable, dark, and even dangerous with swings in black, grey and dark green colours and sounds of shelling, clashes and war aeroplane hovering in the background.

When you get closer, you see happy kids, laughing, singing, playing and quarrelling as usual. Amongst them, there is a child, whose father was martyred a week ago, wanting to take turn on the swing! The laughs and screams of the kids cannot help you overcome your gloomy feelings, rather they increase it. Don’t you think that those children deserve brighter colours, cleaner air and more safety? You shake your head in order to avoid any further feelings of resentment.

We received photos for feast compounds in other areas in Syria. They were crowded with people, wearing new clothes, heading to restaurants and cafes. They were areas, where the people look happy – living the feast. We felt miserable again: Have they forgotten the situation in the country or are they trying to forget it? Good friends from those areas told us their feelings of guilty for committing happiness despite the tough situation.

With his unusual movement, the owner of the new plane in the skies of the first day of the feast holiday, did not shell unusual areas. We haven’t heard of targeting the feast compounds or places where the children are gathering for example. Their happiness was the target. Happiness was at the center of the goal. Panic and destruction is a gain!

Although he was able to attack their happiness sometimes, the kids succeeded in not giving this opportunity to him or to that, who bought him the new plane. They were able to seize happiness this time and they will every time. Happiness is no longer a habit, accompanying the feast. But it is seized during the periods between every attack and another, or between a massacre and another. Happiness has become a resistance act! Let’s try to bring it deliberately at a time, when we cannot possess it even as resistance.

Bread and Freedom / Razan Zaitouneh
Rising For Freedom banned .. the reason is … photos of adorned women
To Top