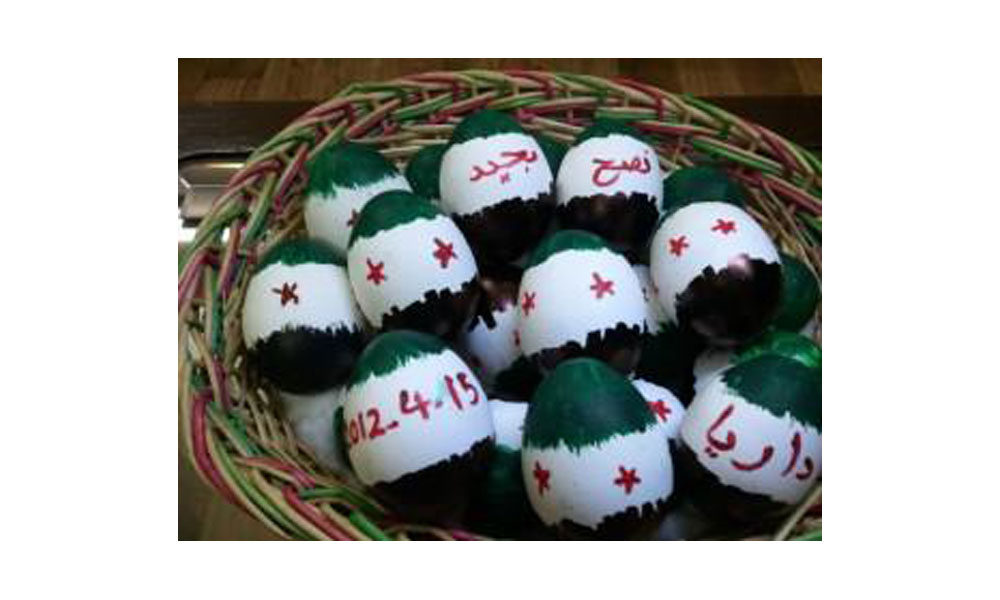 Whatever goes on in Darayya, it is always full of colour. That is something we have come to expect from this inimitable city, in the governorate of Reef Dimashq, the countryside surrounding Damascus.

It happened in 2003, when local activists were arrested for staging unauthorised protests against the American invasion of Iraq, and at the start of Syria’s revolution last year.

Most of the first and second tiers of activists – and perhaps the third as well – have since been jailed. Unlike most of those detained in the course of the Syrian revolution, those from Darayya are not released after a few months. It is no coincidence that the head of Air Force Intelligence, Jamil al-Hassan, who is up to his ears in blood, is pursuing a personal vendetta against the Darayya activists and all that they represent.

The enforced absence of these activists has affected the city, its colours, discourse and slogans. Hence, the creation of the Assembly of Free Women of Darayya was no small event.

Young women in this city have always been at the centre of important events. Now they have decided to take a step forward with the formation of the assembly. This places them in irreconcilable opposition to the regime.

The Assembly of Free Women has set out a set of principles, a vision for the future. On its Facebook page, it defines its mission as being to “elevate the status of Syrian women in all fields”, and its goals as “spreading a culture of equality between the sexes, while taking women’s unique role and position into account, and increasing female participation in public life”. As short-term goals, the assembly says it will “organise awareness-raising forums and continuous meetings with the city’s women, and encourage them to participate as much as they can”.

The first time I read this introduction to the assembly’s aims, I was disappointed. What these young women are doing is far too profound to be described in conventional language reminiscent of the notorious [official] Women’s League.

I have always regretted the fact that young men and women in Darayya do not describe themselves in adequate terms. Calling themselves male “pacifist activists” or female ”feminist activists” does not remotely give them the credit they are due.

At organisational level, though, they lack neither creativity nor persistence. It takes a lot of courage to form an assembly like this, working for the future in the midst of a bloody revolution.

“Now that we have proven our credibility and good intentions to people over the course of a year and three months, and after working hard on the ground to make this revolution succeed, we can spread our culture, goals and vision for a future Syria, covering all aspects – social, political and cultural,” Joumana, one of the founders of the assembly, says.

“Our aim is for women to be aware of their own rights and the rights of others, in a homeland where everyone coexists. This country of which we dream will not see the light without the participation of aware, educated women.”

Joumana sees no contradiction between awareness-raising and revolutionary action. “We need both,” she says. Revolution without consciousness or a vision of the future is not enough, nor is revolutionary zeal without culture, she adds.

She argues that it was not possible to form this assembly any earlier, until female activists consolidated their presence on the ground, and until the revolution entered every home in Darayya.

In addition to staging sit-ins and demonstrations, these young women have engaged families in Darayya through colourful, unique ideas and activities, such as painting Easter eggs in the colours of the revolutionary flag, placing photographs of detainees in biscuit boxes that are given to children. That is in addition to more conventional revolutionary activities like providing relief to those in distress and care for the families of detainees and martyrs, and helping to edit and distribute the Inab Baladinewspaper, published by the Coordinating Committee of Darayya.

I asked Joumana about the relationship between the assembly and the coordinating committee, and why she and her colleagues have opted to work independently of one of the oldest and most well-regarded revolutionary bodies.

“We consider ourselves part of the [Darayya] committee,” she replied. “We are in constant touch with them, and all our activities are promoted on their official [Facebook] page. Our work as young women has never been independent of them. We’ve been working together and consulting each other on all matters since the start of the revolution.”

She added, “Our group is only separate from [the coordinating committee] insofar as our areas of interest and specialisation differ. Recently, the committee has not given our activities as much coverage as it might, so we have decided to start our own information page.”

I then thought that excluding these women from coverage on the Internet definitely means that they are being marginalized on the ground, because Darayya, like the other cities of the countryside surrounding Damascus, is conservative.

Joumana says most of Darayya’s inhabitants have been supportive of the women’s activities, but there are still some opposed to them, especially when it comes to demonstrations.

These people believe young women should restrict their activism to the home, and should not go out on demonstrations. Some say they fear for the young women’s safety, while others are afraid of the female presence itself and of what Joumana calls “our future political activity”. “They don’t want us to be active in this field at all,” she adds.

Fortunately, the Free Syrian Army, FSA, is no longer among those opposed to the young female activists.

“Initially, the FSA in the city was against our activism, but over time, with persistence on our part, and view of nature of our activities,

it has changed its view of us. As an assembly, we have no contact with the FSA, but we think it should be supported to become more united and organised.”

Since the Assembly of Free Women of Darayya was launched, it has been active continuously, with theatrical performances for children (see here, for example), photographic exhibitions, sit-ins and demonstrations, the most recent of which was held a few days ago, bringing young women from Darayya and Suweida together.

What is most important, though, is the message that these activities carry, and the very existence of this assembly and the young women who make it up.

Darayya is a source that never dries up. Despite the pain that surrounds us, this city always gives us reasons to be optimistic, because we can see in it the Syria of which we dream.