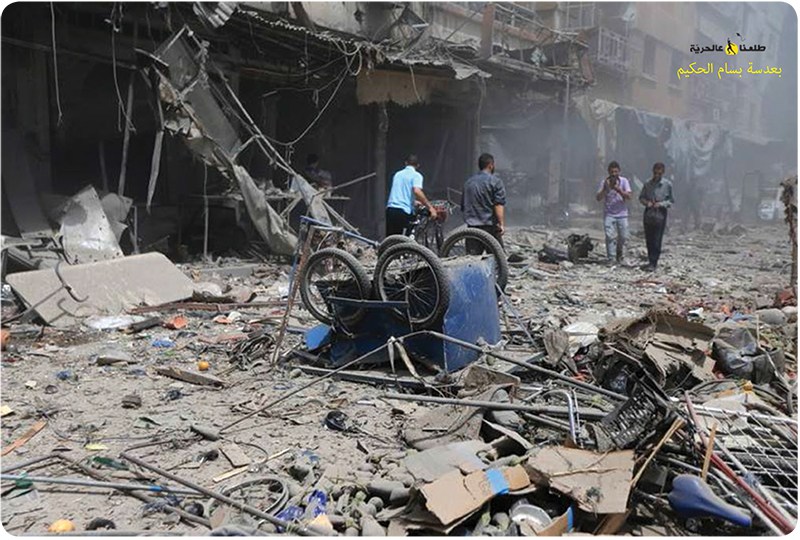 What is it that we shall start with, when we write about the massacre?

Why shall we write and for whom? It is not the first of its kind and will not be the last. There are a lot of indications that it will be repeated.

After denouncement and condemnation, with perplexity this time, the Syrian people seek the handover of the warplane that committed the massacre.

If you want an idea to reach a person, who does not want to receive it, or a person, who understands only what he wants, how would you do that?

We say, “The bank of objectives of the regime forces were implemented as should be. All the attacks were a one hundred percent certain. The rocket in the second strike fell at the same spot of the first one, exactly as in the tales of Zorro and Robin Hood, the hero insists that his spear gets exactly in the same spot of the first spear, dividing it into two. Of course, we are not praising the skillful pilot – or the smart rocket!. Any skills can never justify a shameful action”.

In another story: “Yes, of course. The strikes of the military air force that targeted the largest popular market , crowded with poor people and vegetable sellers in Douma were a retaliation to the attempts of the opposition forces from inside Ghouta to attack the headquarters of the security forces in Damascus … his own Damascus! By the way, demonstrations were arranged against the opposition forces there. In fact, they were a retaliation to the attempts to raid one of the military sites, in the outskirts of Ghouta, flooding it with the artillery fire and rocket shelling day and night. For this, the regime was forced to retaliate. It isn’t targeting civilians… “Is there a government that kills its own people?!” We are really strange! The poor regime is under a global conspiracy and it is defending itself. That’s it, the regime forces were forced to shell, in one day, four popular markets, crowded with labourers, children and beggars, in Gouta areas of Saqba, Hammourya, Kafr Batna and Douma. The massacre came a day after shelling a market in Idlib, a day before shelling another market in Daraa and four days before shelling the same market in Douma for the second time. They are all neither unarranged nor premeditated! Perhaps the targets were military posts, but the rockets and shells hit civilian complexes by mistake”.

Talking about victims without figures: There were martyrs, who were documented by their names, other martyrs were kept anonymous, disfigured bodies, and huge piles of body parts!

According to a testimony, given by a physician in the Unified Medical Office in the Easter Ghouta to Freedomeraise: “The medical points in Douma weren’t capable of receiving the huge number of injuries, a lot of whom were evacuated to other hospitals and medical points in Ghouta. Some of them were martyred there. In Douma alone, nine operating rooms were working at the same time. Some colleagues were forced to conduct surgeries on simple tables in the passages between the operating rooms.” He continues, “One cannot imagine the size of work we had in one day. I remember about 7 or 8 years ago, an earthquake hit Turkey. The number of the injuries was similar to it in this massacre (more than 500 wounded), but in the case of Turkey, the entire country moved for the rescue and it was not besieged. It received aids from several countries: planes, fully equipped with mobile hospitals with full medical and logistic staff and specialized physicians.” Then the physician comments: “The strike today is in fact worse than a strike with a chemical weapon.”

Another physician was exhausted perhaps psychologically more than physically, after two days of heavy work as he conducted a number of surgeries more than he might conduct in a year at normal times!

Arriving at the medical point to donate blood, he saw a woman, holding something in a blanket between her arms and crying bitterly. He tried to calm her down as she was acting hysterically: “Calm down sister” or “woman”. As the calm words did not work, he shouted at her. She got silent. The blanket in her arms was uncovered to reveal a dead kid. He murmured with some religious words and continued to talk with her:

He left her to see other people. When he got back to her, she said, “Take me home”. He said: “Where do you live, sister? I will be taking you to your home”. While he was helping her to get into a car of some volunteer, he heard her crying again, “What shall I tell my husband? He told me not to take the boy with me to the market”!

On the second day of the market massacre, the war planes, artillery and rockets continued the shelling and strikes. In the evening, one of the paramedics said: “Thanks God, we have only five martyrs today!”

The disaster was aggravated by the analysts’ views on the massacre. As any other event, the massacre is an opportunity for everyone to show that his views are the right ones. “The regime has regained his vitality and international recognition. It is now more assured to become more brutal.” “The regime is in its weakest cases. What you see is the last desperate attempt of the wounded monster.” Whilst some analysts used the massacre to emphasize their atheism, others say that the massacre is another test from God for the believers.

Some of the little virtues of the siege were the absence of electricity and communication means. that spared the bereaved in Douma reading the opinions of the analysts and their conclusions about the causes of the massacre and their expectations.