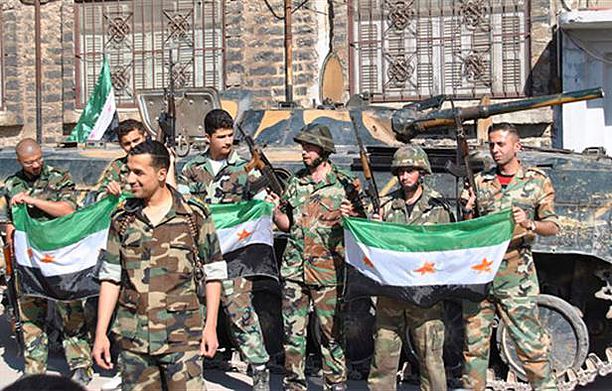 How can anyone account for the phenomenon of having FSA battalions in some of Syria’s liberated areas joining service and civil work as well as spending huge amounts of funds on them while battles continue at many frontiers in those areas?

Assuming that the giving authorities truly aim to help the residents in service and civil matters then why would they delegate this mission to the military battalions and brigades.  The authorities are even delegating these responsibilities to certain battalions; instead of local councils and civil groups; and putting very specific conditions for their own sake not the residents’ of course.

How could running a bakery, coordinating public traffic, supervising schools or courts and many other civil matters be the responsibility of fighting battalions?

Logic dictates that these given amounts of funds should be spent on the battle, to reinforce the fighters’ military power as well as their tolerance at the frontier not to spread these authorities’ ideologies or to empower a party they support on ground.  What is really happening in some of the liberated areas is undoubtedly going to the opposite direction.

As if there is someone who is building small states along with their  funding and weaponry which, in turn, gives him the illusion of control.  It is delusional simply because those liberated areas are still under siege, right in the heart of the confront – with the regime- and the possibility of re-invading them at any second is not faraway.  Furthermore, the liberated areas are under constant aerial and ground shelling by the regime’s forces and the percentage of residents who came back; after they were displaced; is insignificant despite the overly exaggerated numbers that are being reported.

Any civil or service department that has been established by those battalions is not anywise suitable for the upcoming transitional phase to be used as a basis or to build on it.  This is not only the consequence of its improvisation and lack of specialists but also for the simple fact that such departments are being sponsored by political parties which may run out of funds anytime when the giving authorities change the cards of their game.  In addition, these departments have excluded all those who do not share the same ideology or loyalty with them and they have even turned it into some sort of animosity which can be easily sensed in the chats of people and their affiliations.

On the other hand, there are many battalions and brigades that are effectively participating in the civil and service work hand-in-hand with the residents and not imposing their authority with weapons or funds.

Another reason why the fighting battalions had to join civil work was the weakness of civil groups.  This may be attributed to actual lack of power or sometimes it is due to lack of funds that enable them to do service, civil and aid work.  Civil groups do fight on the most trivial matters whereby they all agree that the situation is very bad and they need to do something about it.  But they are not willing to do any sort of concession that leads to unite their efforts and empower them to confront the negative aspects which have become a daily reality.

Many believe that things will change in the near future especially when residents who were displaced come back but this entails the need to start re-building from scratch.  Besides it implies dealing with all outcomes of the current situation including animosities between those paper-like institutions which are based on unstable ground, the remnants of old institutions from the regime’s era and the challenge of re-operate them on as accurate and strong bases as possible.