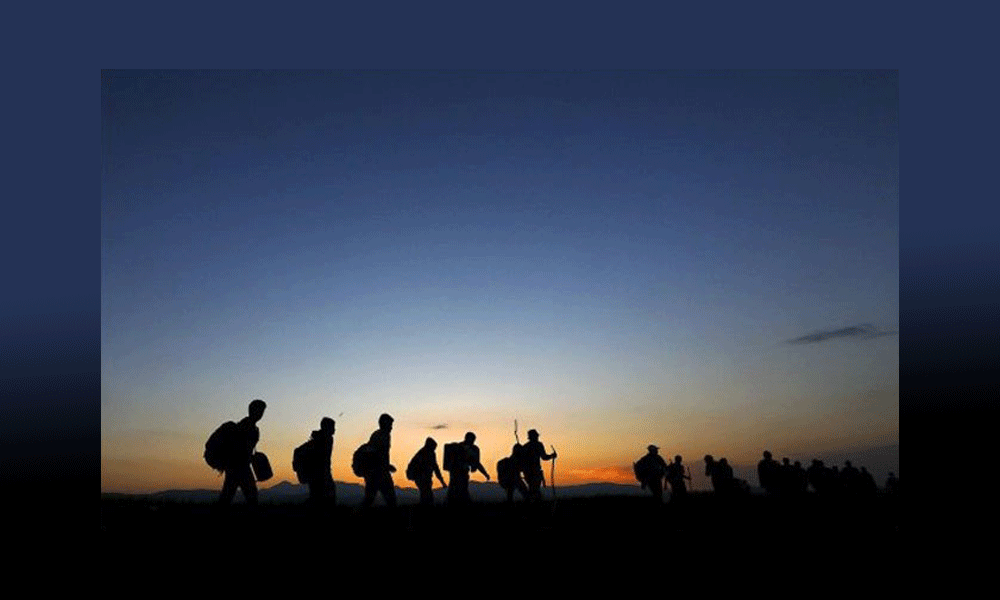 The fierce war that the world has created in Syria left the Syrian citizen in front of two hard options: either death or seeking refuge. Being a refugee, the Syrian keeps searching for secure life and physical and psychological stability. As soon as he arrives in Europe – the grey land – he faces reality and his dreams vanish gradually.

Like many other people, I arrived in Germany seven months ago in search of a safe haven away from the conflict and disastrous world. I started collecting my pains and memories quietly and thinking of has recently happened in Syria.

When I first arrived in the EU country, I was amazed with the beauty of the place and the spontaneity of the free thought in the western countries. After I got out of the refugee camp, I started collecting my pains and touching things around me in order to get an image about the full scene as any other human being. I have realized the size of disaster, surrounding me, and the decorated humiliation in the nature of the relation between the European and the refugee, who has come from the land of camels and tents – as some westerners use to describe us. The cultural integration into the European societies was not an easy process.

I always thought that Europe supports independency and open thinking, opposite to the situation in my own country. However; I did not find much difference. A lady arrived at the hostel, where the refugees were gathered to offer help. She was a very nice woman. We all felt grateful for her kindness. In less than ten days, one of my fellows in the hostel was summoned to appear at the police station for interrogation for uploading a photo for the Syrian actor Salloum Haddad from the TV series “Zir Salem” on WhatsApp! He was very tense until the day of interrogation, when he discovered that the “nice” lady, who was visiting us on a daily basis, was collecting information and reporting about the refugees!

A large group of the refugees in Europe is suffering. They suffer internally as the pro-revolution refugees are often obliged to relinquish their revolutionary principles in order to be able to deal with their fellow refugees. But they soon get in dispute with those who support the regime and its thugs. Both sides end in the police station to have notes, recorded in their refugee files.

The other suffering they face is their wish to return to Syria. If the Assad regime is toppled, a large group of these refugees would get back to Syria for many reasons. However; others would prefer to stay in Europe and get integrated in the western society to establish a new life if they can learn the language and get proper jobs.

Following the withdrawal of the American forces from Iraq in 2009, the European Union returned more than half the Iraqi refugees to their country on the justification that the war has ended and life in Iraq returned to normal.

If the UN treats the Syrians in the same way it had treated the Iraqis, how would the situation of the Syrians be when they return to their country after three years of migration in light of the underway political settlement in Syria that seems to keep the regime of the Assad in power, with some unreliable opposition personalities?

Consequently, the Syrian refugee is not sure whether to get ready to return to Syria or to work on establishing a new life. This unstable situation is not unique. All the dreams this refugee had built before coming to the land of exile started to vanish gradually as the refugee is threatened personally: He is caught between his past and his present and between reality and fantasy.

In the past, we studied about the western colonization of our countries and about the Arab revolutions against it. With the beginning of 2011, the Syrian revolution was launched to start an era of struggle and fight against despotism. Five years later, the revolutionaries looked towards the previous colonizer and they even struggled in order to be integrated into its culture to show good conduct and good intentions and achieve convenient future for their families. Nevertheless; the way is long and full of obstacles.

The European way of treating the Syrian revolution

During the initial years of the revolution, the Europeans played a vital role in escalating the political and armed conflict against the regime. Their position was clear towards the Syrian people. However; after the revolution entered its fourth year, they started dealing with the revolution with ambivalence. In certain areas, they used to support the opposition military forces, whilst in others they accused them of terrorism and cooperated with the regime to get rid of them.

The western governments do not care about the Arab peoples, as long as they see them as inferior to them. In fact all they care about is their own interests to control these Arab countries and peoples. All that the UN is seeking today is ending the underway conflict in Syria either for the benefit of the opposition or the regime; it makes no difference. The UN is only concerned about imposing the mandate again in a civilized way that is acceptable by both sides in order to ensure a long life for this mandate without revolutions or uprisings against its interests in the Arab countries. This way, it makes sure that the Arab citizen is grateful for this colonizer that helped him to get rid of the situation of fighting and hosted him generously for a period of time.

The Making of the Truth
Terrorist Revolutionaries
To Top