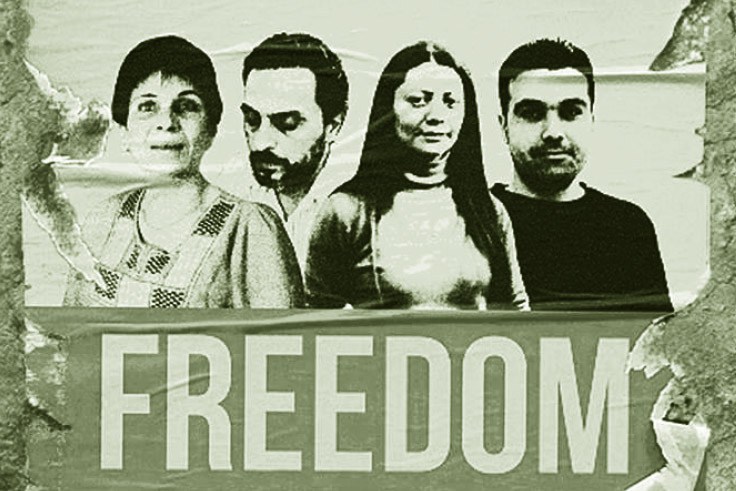 We were putting the finishing touches on our Issue 49 of Freedomraise, when we learnt that the distribution of the previous issue was banned in Aleppo and its suburbs. This means that 5,000 copies of that issue have not seen light in that area.

When we asked about the reason, we found that some powerful authority in those areas objected the appearance of adorned women on the magazine pages.

Of course, our initial response was to deny that. Our magazine is a revolutionary publication that is concerned with the affairs of the Syrian revolution and has no relation with excitation or photos of adorned models. After rechecking the issue, we noticed that the issue included a photo for two kidnapped activists from Douma “Razan Zeitouna” and “Samira el-Khalil”. There was another photo for Kurdish women fighters in Kobane, and an unclear painting by the Syrian artist “Delawer Omar”.

The matter here is not only explained with the rejection of the extremists of the western culture (that they might think the people in the photos emulate), nor is it a return to the religious texts that we know they say “There is no compulsion in religion,” nor was it complying with what Allah the Most High says, “If they turn away, then upon you is only to convey the Message; and Allah is attained Guidance.” In fact it was an attempt by the extremists to force us to reject ourselves, our traditions, our lives, our history and even our hopes.

This ban concerns two kidnapped activists, who were deemed as icons of the Syrian revolution. Again, it was an aggression against the most important values and demands of the revolution and its supporters: The values of freedom, dignity, right to difference, minimizing the evils and making the lives of the people easier by providing them with their basic needs, respecting their privacy, beliefs and individuality that does not harm the public space.

In this issue, we focus on the journalistic work in Syria and the absence of protection for journalists in the face of death that is creeping from all sides. Again, we raise our voices in support of print media, freedom of speech and in protection of the word that the Syrians have paid their lives for.

While I was writing this editorial I excluded a very beautiful literary article that included some kind of flirting words. I was torn between worrying about the safety of our staff in Syria and fulfilling their wishes not to be hasty in my judgement on their material. In fact the flirting words in the article was less explicit than that in the poetry of Abu Nowas and Omar Ben Abi Rabiaa, but this proves how despotism imposes itself on us to get into our souls.

At the same time, I feel a need to cry with anger. Four years after living injustice and suppression, we are still forced to hide our words and sighs, whilst others are not prevented from casting bullets and cutting throats in order to tighten their grip and impose their despotism.

The confusing question to ask now is: If a group of people here or thousands of people there are going to draw the features of the Syrians and disfigure them, where are the rest of the people? Where are the millions of Syrians, who are yearning to live a normal life as well as the other good people in the world? What do they think about those, who have placed themselves as the guardians of the religion of Allah on earth?

Let’s raise our voices and unite. Let’s keep hand in hand, otherwise; we all will be wearing black or be in coffins. Then life will no longer recognize any colours, except white and black!