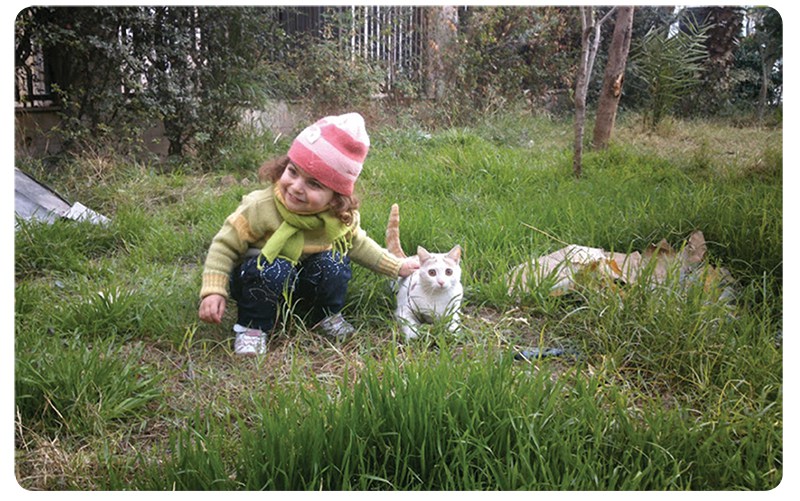 Lulu is a small kitten that lived with us at home, work place and under siege. He experienced with us the cold and snow waves. He learned with us to eat anything can keep him alive, even if he doesn’t like it. He was injured several times with shrapnel of the shelling that does not spare a stone, a human being or an animal! We used to look for it after every airstrike or artillery shelling. Every time it got out smoothly from under the rubble as well as any cat.

Simply, that is it. We found him at the doorstep of the office, closing his eyes for the last time. We did not count whether he has used up his seven souls … or nine may be!

A sight was about to suffocate me, whilst standing in front of the dead body of the roommate. I felt a bitter cold, accompanied with another feeling of guilty for being so sad. I was ashamed of indulging in sorrow for a kitten -an animal -, whilst the country is burying thousands of children, fathers, mothers and youths, who are being martyred in “wholesale and retail.”

Contradicting feelings rise inside me. Feelings of despair for what (who) this naughty kitten, that has left us forever, had represented for us. I tried to hide my pain in condolence of those who lost dears … of human beings.

I wondered how my little daughter was able to accept the issue better than me, as if she understood what I could not understand. (Lulu died)! I came to know that the three-year old child has recognized death with the passing of the father of her friend and the friends of her parents before we found time to simplify the idea for her through things or animals.

I learnt that we should not hide our feelings or put them on trial. There are no wrong feelings. So, I returned to my sorrow for my kitten. Yes, I am angry for Lulu (an animal).

A while ago, several video tapes were revealed, showing the brutality of the savage soldiers of the Assad regime. In one of the videos, a group of soldiers and their thugs were executing a group of mules and donkeys by shooting them without reason. In the opposite, there were a lot of photos for a revolutionary fighter, feeding a little kitten for example, or an activist, caring for a weak animal.

Before the eruption of the revolution, some friend, who was jailed in the Sednaya military detention, said that when the prison guards need a break after a round of torturing the prisoners, they used to amuse themselves with torturing unlucky cats that reach the prison. They used to kill them either by hanging them or by burning them after soaking their bodies with kerosene! Perhaps that was a measure to fuel the surplus of sadism they were raised on.

These pictures were not in vain, they possess a signification: The moral superiority of the revolution is the fuel of it and the guarantee for its future.

It is true that there is no single Syrian, who has not seen at firsthand bodies or parts of bodies of people he knows or loves, or photos, leaked from the detention centers of the regime for parts of bodies of detainees, who were killed starving or tortured … and more than that!

Does that mean that we have to stop feeling? Do feelings fade when exposed too much or very often to the pain? The medical answer is YES. However; that does not mean that we have to get used to that and stop feeling the pain that is less bitter. Kindness is always there, even if others may think that caring for the animals is an advanced non-basic stage for the achievement of justice and human rights, and even if they say that goodness to non-human creatures is an exaggerated luxury that has no place in front of the plenty of massacres and troubles against the innocent people in this non-innocent world.

The despots do not want to cause pain to the weak as an aim in itself, they rather aim to achieve what is more than that. They want to erase the senses of those who are caused the pain, to stop feeling (become animals) and so it becomes easier for them to control a tamed cattle.

Consequently, the resistance of this absence of senses becomes an important part of the battle in resisting the despots and despotism. The resistance this time is – grief!

Terrorist Revolutionaries
Clash of Barbarisms in Syria
To Top